Good to see Dems holding up the relief bill because of this horse shit: 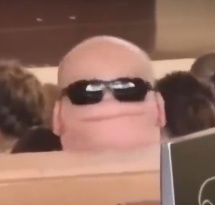 Is anyone surprised that they had all these things just sitting there waiting for an event like this to come along. Creates the perfect cover to accomplish all kinds of things.

Trump hating Dems have to be suicidal at this point.
dt
Top

Lol
Love one of the responses. ‘Trump is giving hour long virus updates live at the whitehouse while Joe can’t make it 5 min before losing it
Top

Lol
Love one of the responses. ‘Trump is giving hour long virus updates live at the whitehouse while Joe can’t make it 5 min before losing it

Not sure what’s more stupid....The ingestion or the media promoting the TDS
Top

Here is the perfect example of TDS.

Evan is a Seahawk blogger that I follow on Twitter. 90% of his tweets are about he Hawks and the other 10% is anti Trump nonsense. I like the Hawk content so I put up with the Trump tweets. This is clearly an intelligent person but has such an intense case of TDS his brain converts any benign innocuous non controversial quote by Trump and twists it to make is seem like Trump is Satan in his mind. Here is an perfect example:


Trump:
WASHINGTON—President Trump said he hopes to have the country reopened in just over two weeks, a timeline that is dramatically sooner than what many public-health experts have recommended to help contain the coronavirus pandemic.

“I would love to have the country opened up and just raring to go by Easter,” Mr. Trump said on a Fox News town hall filmed in the White House Rose Garden on Tuesday. At a press briefing later Tuesday, Mr. Trump referred to Easter, which falls on April 12, as a “beautiful timeline” for reopening.

Evan's translation:
Getting texts from multiple elderly family members telling me that it now seems safe to go outside because Trump said he is "re-opening the economy soon".

Let's not assume for a single second that our President's narcissism won't get people killed. This impacts all of us


Ok I just saw this. He just figured out at age 25 that Tortilla chips are made of Tortillas. Explains a lot.

Alex, goddess of Wine glass
@alexandralhill
· 11h
Day in the life of being married to my sweet husband: Evan just learned that tortilla chips are made from tortillas via a @BingingWBabish video we are currently watching. I just...I...there are no words. I think he’s having an existential crisis.

Sensationalism is all they have left.

Some bozos still fall for it.

I remember a few years ago telling people on this forum they shouldnt trust the news and they scoffed when I named some smaller sites that aren't owned by the 6 liberal corporations.

I'm curious if they're able to see the truth about the media yet or if they're still libs in denial.

These people are lost causes. That has been my long term position because even when faced with the obvious truth- they twist it. I suppose if any are able to admit they were wrong, it would at least show some progress.

Not bloody likely though, is it.
Top

Not sure what’s more stupid....The ingestion or the media promoting the TDS

We all know that anything that's
wrong is Trumps fault!
Top
Post Reply
120 posts